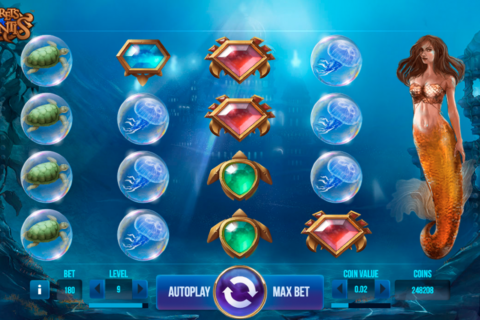 Did you know that only 5% of the ocean has been discovered and explored by humans? Well, if that is a surprising fact to you, then you are one of the many people with numerous speculation on what lies beneath the waters we know. Stories have been told, and one of the most famous ones involves a sunken city full of treasures. Atlantis is a slot game based on the story of this city that was cursed by the gods years ago.

In this video slot by NetEnt, you get to explore some of the hidden treasures in the mystical city as you walk with sea creatures. The 5 reel, 40 paylines game has a bet range of 0.2-200. As you would expect from a slot from NetEnt, the graphics are impeccable and realistic. Each of the symbols used in the reels helps in communicating the theme.

Some of the icons you will interact with include jellyfish, sea turtles, crabs, pearl clams, sapphire, gems, emeralds, and rubies. You form a winning combination by getting any three of a kind on your reels after a spin. The mermaid is the wild symbol, and it is one of the two icons that will give you the highest payouts.

This is because it can substitute for all others except special symbols to form a winning combination. Also, the mermaid is special in that it wiggles its way on the reels it lands on to fill all the sections. This significantly increases your chances of winning.

Another symbol to keep an eye on is colossal since it comes with a respin element. This is the feature that allows us to explore the deepest of seas and walk away with all the treasure that this magical city holds. For three of these highlighted symbols that can only occur on reels 2, 3, and 4, the reels turn into a solid colossal symbol.

Whenever this happens, you get a free respin. In case the same thing repeats itself after the respin, you get another one. You can retrigger the respin feature several times, which means a higher chance of getting a winning combination and more playtime.

The fairy tale nature of them gives the slot an adventurous feel. Go Toers get to walk through places they couldn’t live in, and this is one aspect of the most exciting part of the slot. Since Atlantis is a city mentioned in numerous books and movies, the slot machine is the only depiction that allows you to be part of it and control what happens. This way, you get a magical experience.

The inclusion of the mermaid as a character that helps with the exploration is a nice touch of familiarity in a new world. We all know that mermaids are nice and kind, with this one, you get to reap further from their nature as it helps you find treasure.

🎰 Where can I play Secrets of Atlantis for real money?

The title is part of the game selection for casinos that have NetEnt software.


🎰 Is the Secrets of Atlantis available on mobile?

Yes. You can play on different Android and IOS devices. Also, you get to use the same account information across devices.


🎰 Can I play Secrets of Atlantis for free?

Yes. There is a demo game version available on the different online casinos for those who want to play for fun.


🎰 Do I need to download software to play Secrets of Atlantis?

No. You get the game on instant play on different devices since it is responsive.